The healthcare world’s a stage,
And all physicians merely players.
They have their dreams and their realities,
And one doc in this time plays many parts,
With acts seeing seven ages.

At first, the med student,
Stressing and puking in the nurse’s way.

Then the whining intern,
With an anxious and sleepless morning face,
Creeping like a snail unwillingly to rounds.

And then the resident,
Trying, in earnest, treatments so valid,
made to appear so highbrow.

Then a doc bolder,
Full of strange oaths and focused on patients,
Jealous in honor, sudden and quick in quarrel,
Seeking a stellar reputation, even if anonymous.

And then private practice,
Independently not following a party line,
With secure and diverse payer mix,
Full of work comp and private insurers,
And so they pay their part.

The sixth age shifts into the disillusioned physician,
Regulations arise in overreach;
The youthful zeal, beat down, controlled, employed;
In this shrunk role, banished there by no choice,
Yearning again for independence,
Sulks and bristles on the rounds.

Last scene of all,
That ends this strange eventful history,
Is demoralization and mere oblivion,
Sans practice, sans patients, sans joy, sans everything.

*This melancholic monologue was adapted from William Shakespeare’s play As You Like It, Act II, Scene VII.

If this default future is not as you like it,
don’t just audition for a role,
write your own play! 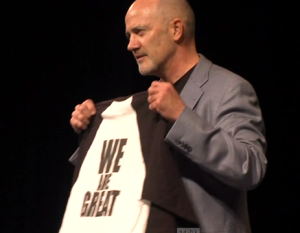 One thought on “The Seven Ages of a Physician*”