He showed us daily, with his words and actions, what it really means to be a servant-leader.
– Bert Guinn, MBA, CAE, Executive Director, Greater Louisville Medical Society Today was truly the end of an era for Louisville’s medical community. After thirty-five years of incredible service to the Greater Louisville Medical Society, Lelan Woodmansee is retiring. At stately Whitehall Mansion, hundreds gathered to say good-bye and thank you. 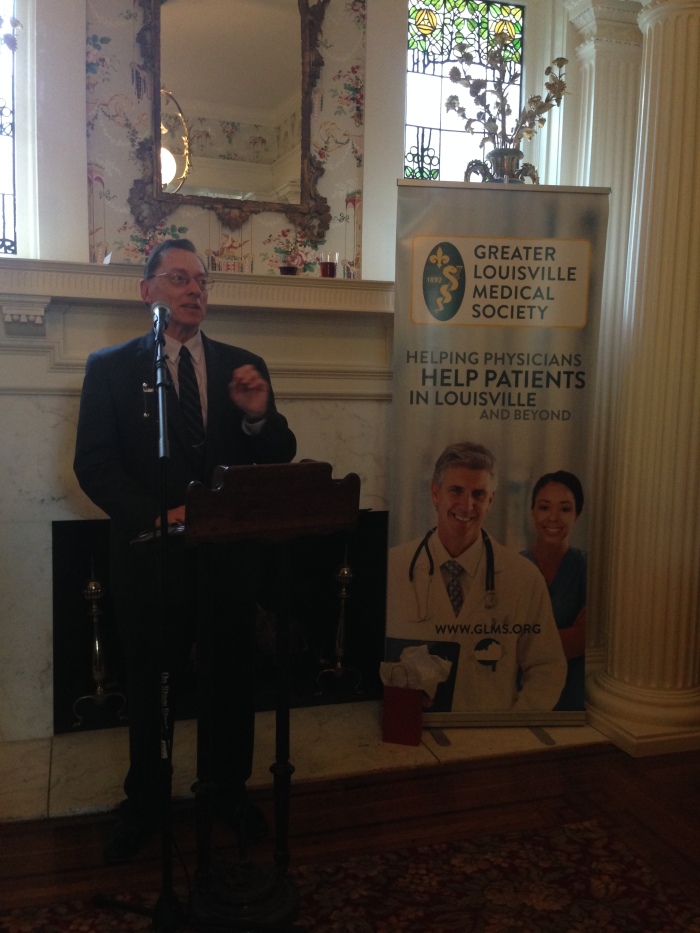 Having now passed the baton (literally) to his protégé, Bert Guinn, Lelan and his soul mate Marlena will finally have time to travel, visit family, and enjoy a little down time. He will be missed, but his presence will be felt for generations to come. As Dr. Gordon Tobin so eloquently put it, “Our members are the bricks but Lelan was the mortar.”

During my time with the GLMS, Lelan was more than my Chief Executive. He was my mentor, counselor and friend. He deserves an epic poem, however it is late and an epic limerick will just have to do.

There was a young man named Woodmansee,
Felt writing might tickle his fancy.
He thought it was great,
At Ohio State,
But later he got really antsy.

So travelled he down to Kentucky.
For this we are all very lucky.
He gave it his best,
At GLMS,
With leadership, steadfast and plucky.

His value is more that you can see.
He helped us be all that we can be.
Three decades have gone,
Now we say, “So long,”
To our dear friend Lelan Woodmansee.

You are invited to read all about this amazing person in the August issue of Louisville Medicine.