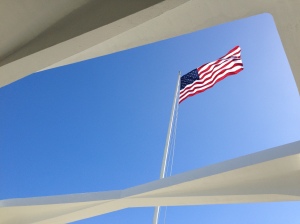 “We would like to honor any veterans by allowing them to disembark first.”

Getting off the boat ahead of the disabled, elderly, and parents-with-small-children felt awkward. But it was Veterans Day. And I had raised my hand when the guide asked if there were any veterans on board.

Exiting, I received nods, smiles, and a few “Thank you for your service” expressions of gratitude.

Back in 1988 I spent only a few hours in Hawaii, dispatched as a Flight Surgeon from the USS Enterprise. But this time, attending the 2012 AMA meeting in Honolulu, I was a tourist.

As I walked along the USS Arizona memorial  – a solemn white barge straddling the sunken warship – I continued to feel glancing stares, looks of admiration, and nods of gracious appreciation.

Eventually I found a large marble wall upon which was inscribed the names of the men whose remains were still entombed in the decaying vessel, still leaking fuel known as “black tears.”

I suddenly began to feel the weight of sadness and wanted to find a way to express my feelings… someone I could thank.

Then I saw my name on the wall. 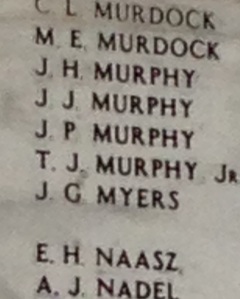 J.P. Murphy died on that ship, in that attack on December 7, 1941, in the line of duty, in service to my country, to preserve my freedom, my way of life, my hope, my future, my children’s future. His remains are entombed in the silent hulk of metal decaying in the harbor just a measure beneath where I stood.

My words could not transit the clear water between my namesake and me. But I did leave a salty tear on the marble floor in front of the wall that bares the name he and I share.

As a physician I have treated many veterans – while on active duty, during medical school, on rotations at the VA hospital, and as a pain specialist in private practice. Whenever I remember to thank a veteran for his or her service, they usually appear a bit uncomfortable with the personal accolades. Most will segue to a story about someone they knew who gave more.

I hope this Veterans Day will inspire you to thank every veteran. When you do, notice that most will shy away, knowing there are many names on many walls for many heroes like J.P. Murphy who gave more, gave all.